Learn about Gems and Minerals

Drusy gemstones are cut from natural mineral specimens that exhibit surfaces with very fine crystal mineralization. Clusters of tiny crystals present a shimmering effect, sometimes described as the “sparkling of sugar or snow”.

The size of the crystals may range within a few millimeters, and in general the smaller-sized crystal surfaces produce a better glistening effect. Drusy crystals may cover, or encrust, all or part of the rock surfaces, and usually form inside vugs and cavities. Frequently the drusy surfaces differ mineralogically from the background matrix in which the crystals are embedded. The matrix may vary from hard agate to softer and more fragile rhyolite, sandstone or limestone. 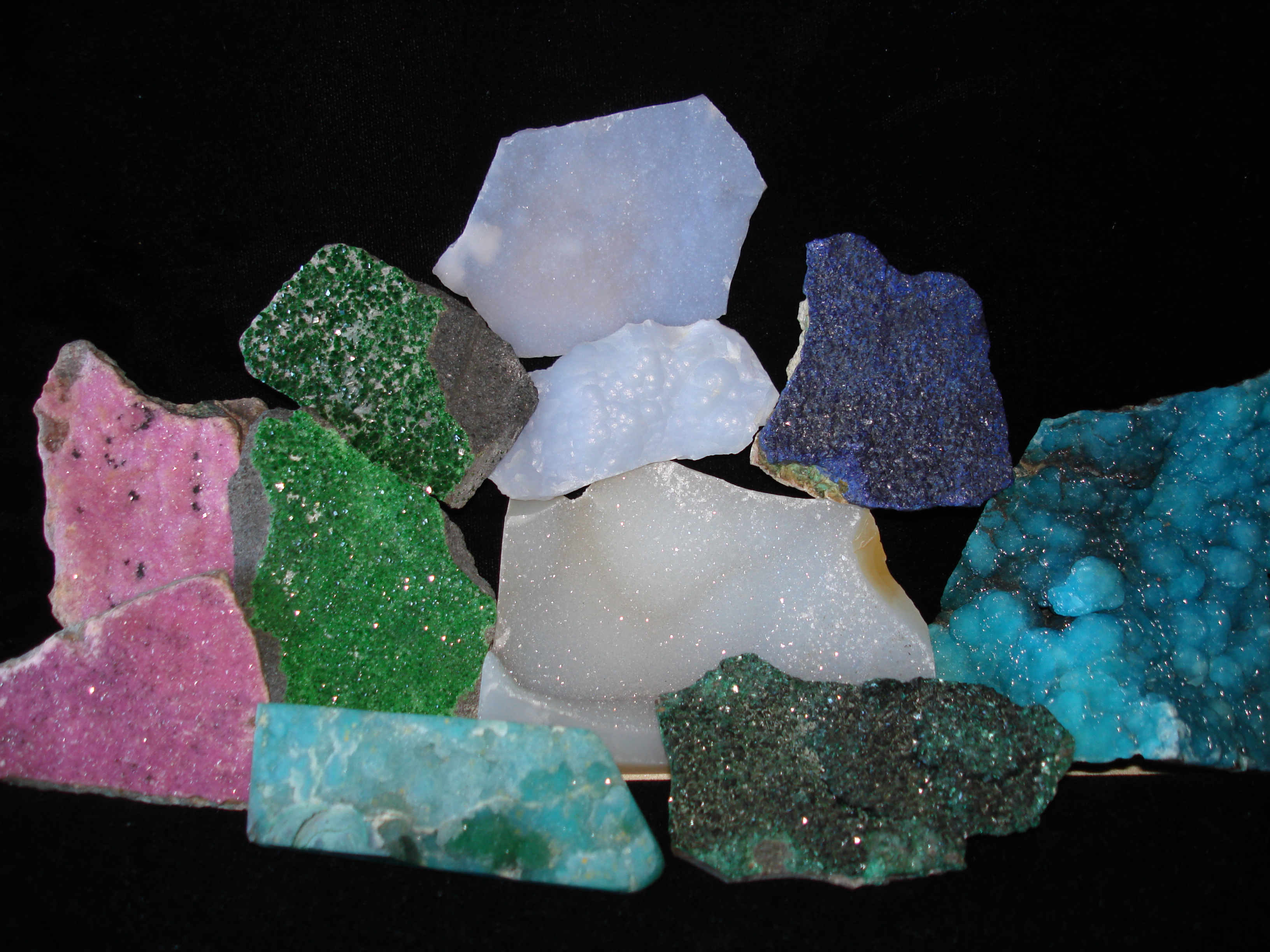 The drusy world is amazing, bountiful and fascinating, and everyone loves wearing a little sparkling gem. The dazzling gemstones stand out in Helen's showcases, and their shimmering effect captivates customers. After all the years of carving drusy gems, when I was interviewed by a trade writer during the 2018 Tucson gem shows about what was the most sought-after pieces in my booth, the answer surprised even me: drusies!

[Excerpt from Helen’s article Natural vs. Enhanced Lapidary Materials- The Drusy Craze, published in the Jan/Feb 2019 issue of the GemGuide]

Various names for the Fine Art of Gem Sculpture 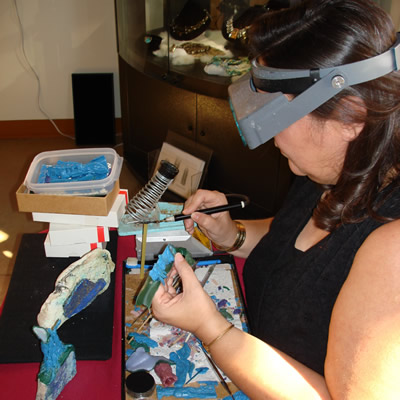 Several terms are used to describe the Fine Art of Gem Sculpture, the art of sculpting gem materials. Some are ancient words, while others are recent ones. Some describe the art in its entirety while others define a specific form of the art. Some are well known, while a few have fallen in disuse.

Several words originate from the ancient Greek glyptos or glyptic = carved, sculptured, hence Glyptic Arts and Glyptography. Both terms are used since the 17th century and refer to the art of carving gem materials.

Lapis is the Latin word for ‘stone’, which evolved from the Greek lithos. Hence the word Lapidary denotes the art or craft of cutting gemstones.

The word Lapidary is used both for the art and the artist, and covers every possible form of cutting and polishing gemstones and organic gem materials. 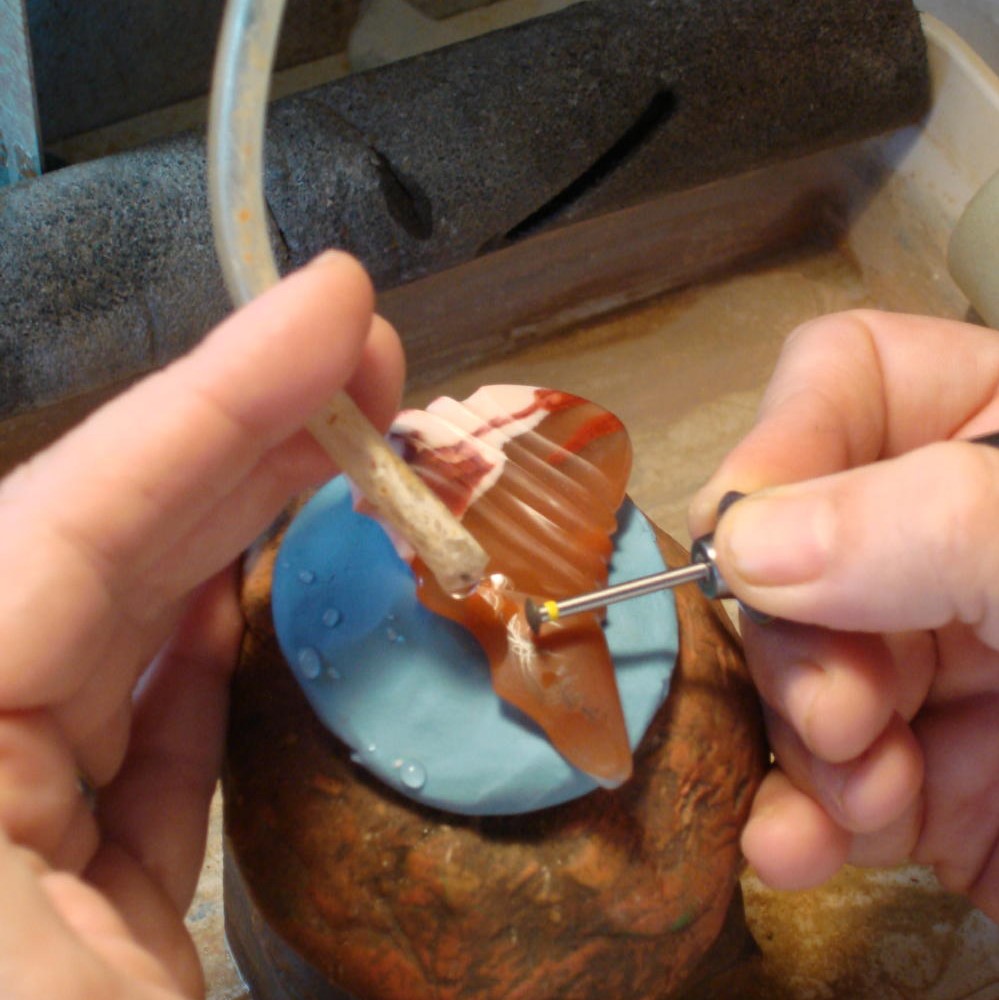 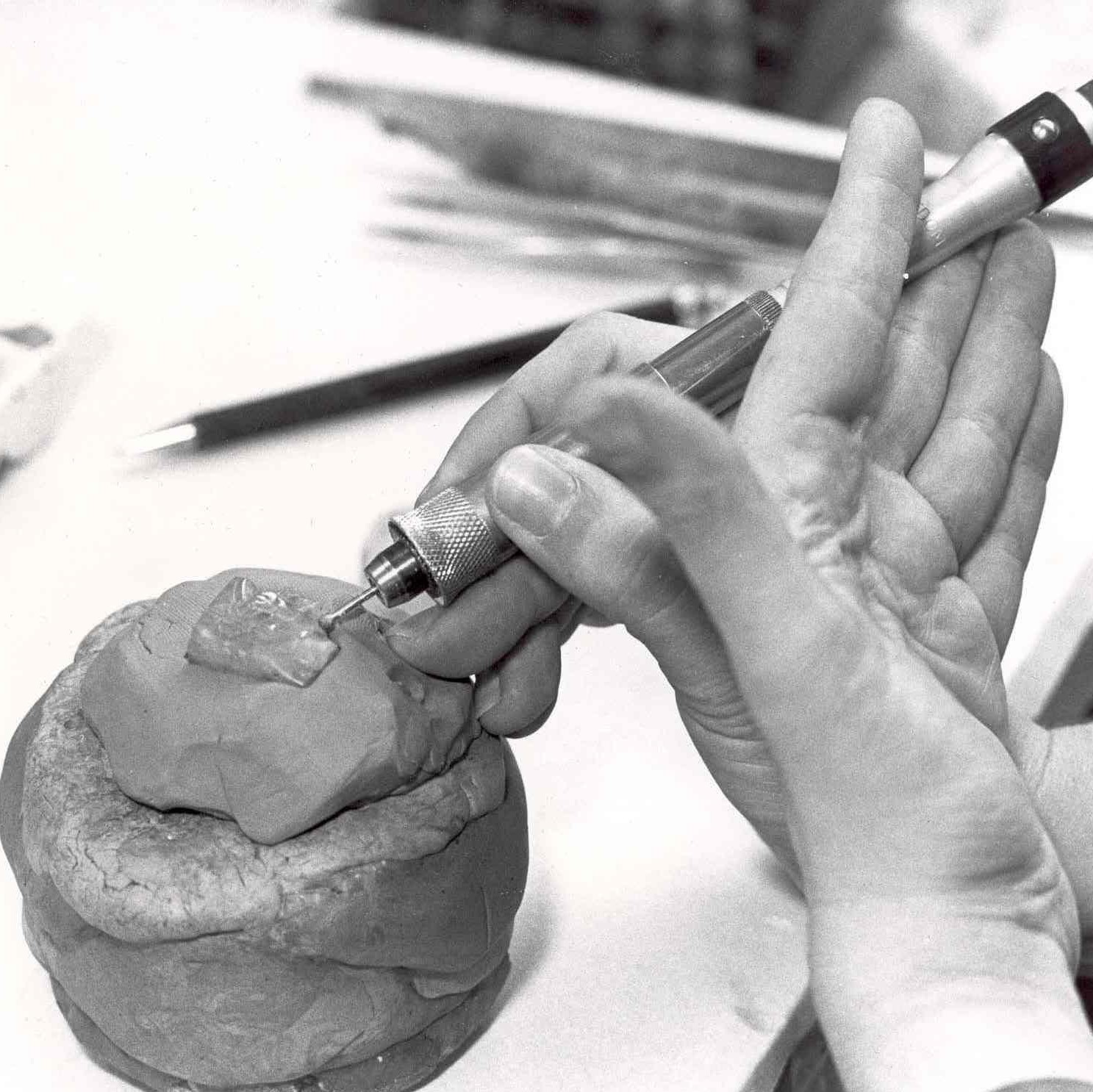 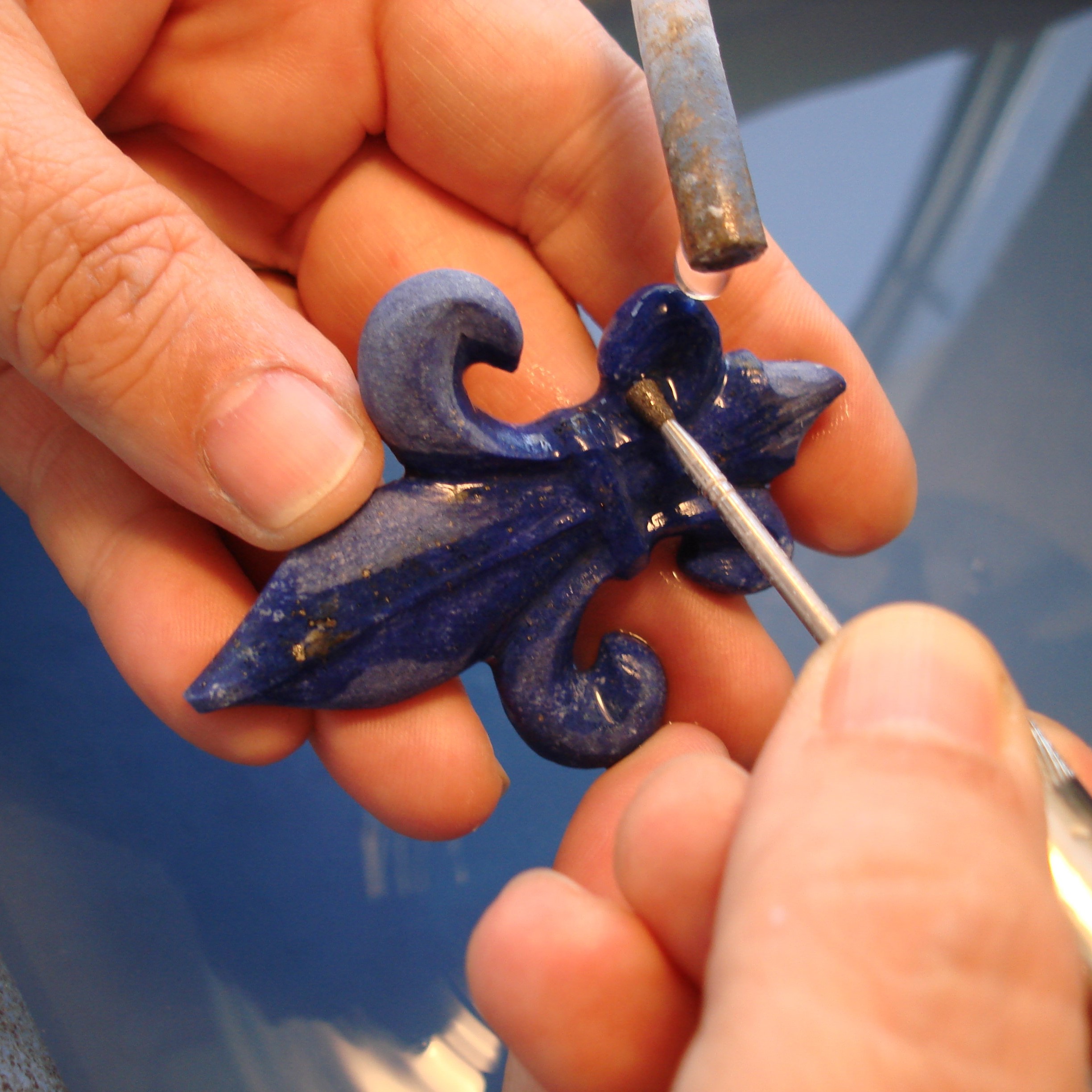 What is the art called today?

Gem Art is the most contemporary term, adapted by the Gem Artists of North America, a term that best embraces all art forms associated with gem materials.

When is it engraving, and when is it carving? 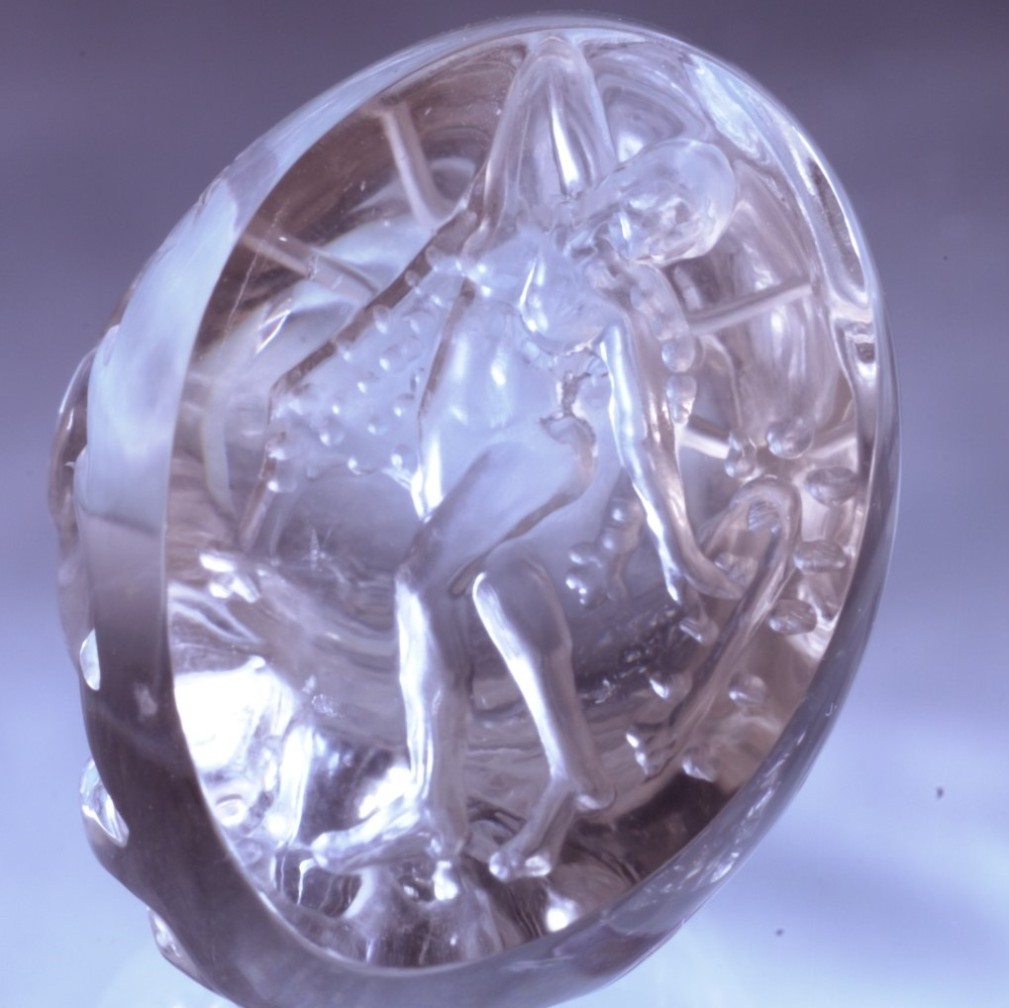 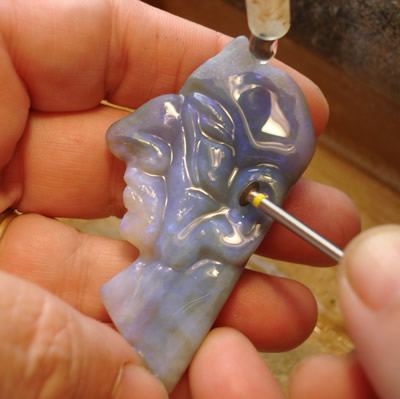 Both terms are used to define removal of matter. ‘Engraving’ truly means to cut in, to incise (like intaglios), and ‘carving’ denotes a more sculptural, three-dimensional in-the-round approach. ‘Gem Engraving’ is used particularly by scholars, for both intaglio and cameo works, especially for ancient and antique works.

Intaglios engraved as utilitarian signet seals are usually cut shallow and with no undercutting, so that the sealing wax can be pulled out of the grooves without loosing  sing any details, while intaglios engraved for purely decorative purposes, such as portraits, may be deeply engraved. Deep intaglios were cut since Hellenistic times around 300 BCE and their surfaces were often polished.
Today the term ‘Internal carving’ is used for extremely deep intaglios engraved through one crystal face, usually quartz, and viewed through the highly polished opposite or frontal crystal face. Internal carvings are usually left in a sanded stage, and not highly polished, as they take advantage of the crystal’s refraction and magnification to project volume. The 18th century term was ‘reverse intaglio’ and the engraving was often painted.

Cameos are relief works on monochromatic or multicolored gem materials, often layered gems such as the onyx and sardonyx chalcedony varieties, or shells. Commonly they feature portraits, figurative and mythological themes.

Gem sculptures in the full round are carved on all surfaces, and may consist of a single piece of gem material or an assemblage of several materials.

Criteria for Evaluating a Gem Carving

Gemstone carvings are a form of sculpture and are governed by the same composition rules just like any other art form. Although creative design and execution rules are broken daily by innovative designs, the rules of the underlying fundamental harmony of the composition remain the same.

The overall design should be evaluated on the: